By Gareth Beavis and John McCann

Android 5 is going to be exciting, there’s no doubt about that. Google saves the change to a new number for the big things, with both Honeycomb and Ice Cream Sandwich making big alterations to the way we use our Android phones.

We thought it would have been Key Lime Pie that showed off the next level, but on 31 October 2013, Google officially revealed its next minor update, Android 4.4 KitKat, which now clears the road for Android 5.

The dessert-themed code name that we assume will begin with L is anyone’s guess at this stage. Android 5.0 Lemon Cheesecake or Android 5.0 Lemon Meringue Pie, anyone? Though there’s talk that it might be called Android Lollipop or even Android Moonshine, as it’s apparently internally known.

It may not be called Android 5 though, with some rumors suggesting the next major iteration from Google’s wheel house could arrive as Android 4.5. That would make sense as we’ve had 4.0, 4.1, 4.2, 4.3 and 4.4 in recent years.

Cut to the chase
What is it? The next major upgrade for Android, to follow on from Android 4.4
When is it out? We’re thinking mid-2014
What will it cost? Nothing, it’ll be a free upgrade

As we wait on official news of that name, we’re constantly combing the web to see what’s going to be happening with this L-powered update, so check back to see what we’ve uncovered and the level of likelihood each rumor brings.

Until Android 4.4 was announced we had expected the Android 5.0 release date to be some time in October 2013. We instead saw Android 4.4 KitKat launch on 31 October, so now we’re expecting to see Android 5.0 shown off in mid-2014, quite possibly at Google IO, Google’s annual two-day developer conference in San Francisco.

Sundar Pichai, Google’s new head of Android told Wired that 2013’s IO was “not a time when we have much in the way of launches of new products or a new operating system”,” which makes us wonder when the new software will be coming.

Our take: Android updates are still coming too slowly for our liking, as while each 0.1-numbered upgrade is good, it’s not enough to make us want the native experience.

We’re expecting Google to make Android 5 rather special indeed, which means it can only wait a maximum of 6-7 months after KitKat was announced to show it off – so mid-2014 has to happen, in our opinion.

More recent reports of Android 4.5 being next in line may put a spanner in the major overhaul thinking, so we’re not getting too carried away just yet.

The first handset to run Android 5 will either be a Nexus phone or tablet, and given the timing of the announcement we think it might be the latter. The Google Nexus 5 launched Android 4.4 at the tail end of next year, and we reckon the Nexus 10 (2014) will appear soon – meaning a tablet launch for the new OS.

HTC looks like the front runner to bring this tablet to the market, so we’re thinking that this could happen mid-2014, which puts it firmly on course to be made soon.

Will it be known as a Nexus? The scheme is reportedly under threat, although in no way confirmed by Google. It does have the Play Editions of its devices, so we could see Android 5 side-launched on other devices – but we can’t see that happening.

Although Samsung is yet to officially confirm its Android 5.0 schedule, a SamMobile source is claiming to know which phones and tablets will be getting the upgrade. According to the source, the devices set to receive the upgrade are the Galaxy S4, Galaxy S3, Galaxy Note 2, Galaxy Note 8.0 and Galaxy Note 10.1. Do note that this claim was made before Google announced Android 4.4, so if it was ever correct, it’s probably a lot less correct now.

Android Geeks reported that Google Babble would debut on Android 5.0. Babble was the code name for Google’s cross-platform service and app with the aim of unifying its various chat services which include Talk, Hangout, Voice, Messenger, Chat for Google Drive and Chat on Google+.

A screenshot that we were sent from a Google employee on 8 April confirmed that not only was this unified chat service on the way, but that it was called Google Babel not Babble. On 10 May, we discovered that Babel would launch as Google Hangouts, and on 15 May we saw it come to life for devices running Android 2.3 and up. So much for it debuting on Android 5. 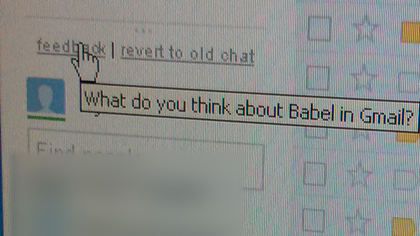 A more recent idea is that Google’s next version of Android will have more fitness smarts built in – and this is an idea we think has legs, if you’ll pardon the sort-of pun.

Apple is set to go big in this area with the iWatch and iOS 8, and other brands, such as Samsung and LG, are making strides too.

The idea is future versions of Android will allow the software to harness “fitness data from sensors on your Android device.”

These could be built into future Android phones and tablets, but it’s also likely that the API will play nicely with Android-based smartwatches and even Google Glass.

Some have speculated that Android 5.0 will be actually Chrome OS, Google’s high power operating system for its Chromebooks – that it would use Android for low- to mid-level handsets and put Chrome on the high end.

However, this makes little sense given the effort that would be needed for app integration, so like Microsoft and Windows Phone the mobile OS will very likely continue as is.

While little is known about the potential interface changes for the next iteration of Google’s mobile platform, be it Android 5.0 or Android 4.5, a screenshot has appeared online claiming to reveal the upcoming version.

There’s a clear visual overhaul present in the screenshot, and according to the leak the new design is being referred to as “Moonshine” internally at Google.

We’ve also caught a glimpse of how the dialer might look in Android 4.5 / Android 5, courtesy of an image leaked by Google itself. It’s not in for a radical redesign but if the image is to be believed then it will be going blue, rather than sticking with the current light gray colour.

While we wait on more Android 5 features to be revealed and scour the web for more Android 5.0 news, TechRadar writer Gary Cutlack has been thinking about what we want to see in Android 5.0 Key Lime Pie. Hopefully the new mobile OS will feature some of these things…

It’s bit of a fuss managing your mobile before bed time. Switching off the sound, turning off data, activating airplane mode and so on, so what Android 5.0 really needs is a simple way of managing performance, and therefore power use, automatically.

We’ve been given a taste of this with Blocking Mode in Samsung’s Jelly Bean update on the Samsung Galaxy S3 and the Note 2 but we’d like to see the functionality expanded.

Something like a Gaming mode for max power delivery, an Overnight low-power state for slumbering on minimal power and maybe a Reading mode for no bothersome data connections and a super-low backlight.

Some hardware makers put their own little automated tools in, such as the excellent Smart Actions found within Motorola’s RAZR interface, but it’d be great to see Google give us a simple way to manage states.

Another little power strip style widget for phone performance profiles would be an easy way to do it.

Google already does quite a good job of supporting serious Android nerds who own several phones and tablets, but there are some holes in its coverage that are rather frustrating.

Take the Videos app which manages your film downloads through the Play Store. Start watching a film on one Android device and you’re limited to resuming your film session on that same unit, making it impossible to switch from phone to tablet mid-film.

You can switch between phone and web site players to resume watching, but surely Google ought to understand its fans often have a couple of phones and tabs on the go and fix this for Android Key Lime Pie?

Android doesn’t really do much for social network users out of the box, with most of the fancy social widgets and features coming from the hardware makers through their own custom skins.

Sony integrates Facebook brilliantly in its phones, and even LG makes a great social network aggregator widget that incorporates Facebook and Twitter – so why are there no cool aggregator apps as part of the standard Android setup?

Yes, Google does a great job of pushing Google+, but, no offence, there are many other more widely used networks that ought to be a little better “baked in” to Android.

Another area where the manufacturers have taken a big leap ahead of Google is in integrating clever alternate text entry options in their keyboards. HTC and Sony both offer their own takes on the Swype style of line-drawing text input, which is a nice option to have for getting your words onto a telephone. Get it into Android 5.0 and give us the choice.

UPDATE: Google heard us and this feature appeared in Android 4.2.

How odd is it that Google’s put a front-facing camera on the Nexus 7 and most hardware manufacturers do the same on their phones and tablets, yet most ship without any form of common video chat app?

You have to download Skype and hope it works, or find some other downloadable app solution. Why isn’t there a Google Live See My Face Chat app of some sort as part of Android? Is it because we’re too ugly? Is that what you’re saying, Google?

6. Multi-select in the contacts

The Android contacts section is pretty useful, but it could be managed a little better. What if you have the idea of emailing or texting a handful of your friends? The way that’s currently done is by emailing one, then adding the rest individually. Some sort of checkbox system that let users scroll through names and create a mailing list on the fly through the contacts listing in Android Key Lime Pie would make this much easier.

If you’re a constant SIM swapper with more than one phone on the go, chances are you’ve lost track of your text messages at some point. Google stores these on the phone rather than the SIM card, so it’d be nice if our texts could be either backed up to the SIM, the SD card, or beamed up to the magical invisible cloud of data, for easy and consistent access across multiple devices.

This would annoy developers so is unlikely to happen, but it’d be nice if we could refuse app updates permanently in Android 5.0, just in case we’d rather stick with a current version of a tool than be forced to upgrade.

Sure, you can set apps to manual update and then just ignore the update prompt forever, but it’d be nice to know we can keep a favoured version of an app without accidentally updating it. Some of us are still using the beta Times app, for example, which has given free access for a year.

Something Apple’s been doing for ages and ages is using a promo code system to distribute free or review versions of apps. It even makes doing little competitions to drum up publicity for apps much easier, so why’s there no similar scheme for Android?

It might encourage developers to stop going down the ad-covered/freemium route if they could charge for an app but still give it away to friends and fans through a promo code system.

It’s be nice to be able to sort the Settings screen by alphabetical order, too, or by most commonly used or personal preference, as Android’s so packed with a huge list of options these days it’s a big old list to scroll through and pick out what you need.

Plus could we have a percentage count for the battery in the Notifications bar for Android 5.0? Just so we know a bit more info than the vague emptying battery icon.