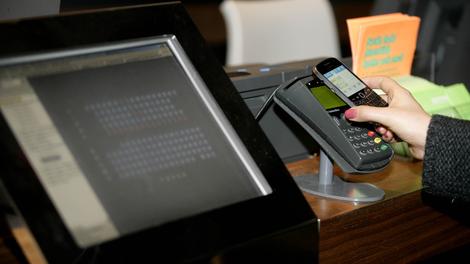 The line between consumer banking and business banking is gradually being blurred through the conversation of mobile proximity payments. We’re talking of course about the ability for a consumer to walk into a business (whether it be high street café or supermarket) and be able to transact with their mobile phone.

Now the universal implementation of mobile payments might seem like a rocket that’s in a constant state of mid-launch, but it’s fair to say that there’s been some advancement recently. Not least in such developments as the Square model, whereby businesses are using tablets and adaptive plug-ins that allow them to facilitate the payment.

Movement is slow, granted, mainly because – for high street retailers and major brands – there’s a massive cost of migrating from current payment methods to a national rollout of new ones. Whereas if you run a few independent coffee shops, it’s considerably cheaper. In this regard, it’s actually easier for the small businesses to take the technological edge over the likes of Tesco and Marks & Spencer.

But is the British public ready for such a transition? And perhaps more to the point, do they even care about changing their payment method, especially if novelty appears to be the only real return? Is there a problem to be solved? This leads us nicely into the reason the world is currently at an interim where mobile payments are concerned, which is quite simply because the bigger retailers with the power to shift the norm are scratching their heads over the same questions.

Terry Cordeiro, Head of NatWest Mobile Banking, suggests retailers are a little puzzled about this new way to shop: “There’s reluctance by some of the bigger retailers to adopt this method of payment because they’re still struggling to understand what the business case is.

Cards are ubiquitous, the technology is readily understood by the consumer and there is no need to further invest in system overhaul… What a lot of retailers are struggling with is how to justify the investment.”

Similarly, consumers are also struggling to understand the reasons to adopt a new way to pay. Twelve months ago Terry’s team carried out a pilot test which was called TouchPay, whereby they enabled iPhones through the use of an NFC compatible case.

This allowed users to make contactless payments using their phone with funds being debited directly from their current account. After originally asking for 1,000 volunteers, by the end of the week 10,000 volunteers had come forward (which incidentally seems to suggest an appetite for customers to engage with technology like this).

The results from this pilot reflected the suspicion that the “cool factor” really is the only offering and it’s not a big enough incentive to change the way consumers behave. “Whilst it might be quite neat to use such technology where people pull out their phone, tap it on the reader, then walk out with a sandwich, there’s really no additional value to the experience compared with doing that with a contactless card. So the question we have to ask is, is it really better than plastic? And on that one to one basis, it’s not.”

“However, if you start to add in the fact that customers are logging into Mobile Banking to manage their spend daily and sometimes more than once daily, other advantages start to appear. Customers can set budgets and get feedback via their mobile devices on what they are spending and when. Banks can also use spend data and their relationships with their business and commercial retail customers to offer consumers relevant and timely offers based on spend, time of day and location.”

“When you tie all this in with a frictionless payment experience, then there’s value I can get above and beyond transacting with a debit or credit card. And what’s in it for the merchant? A unique channel to communicate with customers which drives incremental footfall from trade that has been incentivised through a simple end to end experience – a combination of relevant offers and a simple way to pay.”

The notion of mobile payments naturally places a lot of value on the act of paying itself, whereas the value for customers and for businesses really lies in what happens before and after the transaction. Where we need to look next is the various ways that businesses can provide this value by looking at who’s currently doing it right, and how banks could change the mobile payments space for everyone.